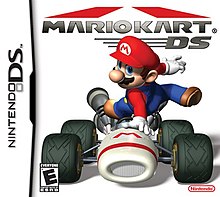 Oh, get rid of all that jargon. You know what Mario Kart is. And you know what a DS is. So, strap in to your Standard Kart M and read the review. 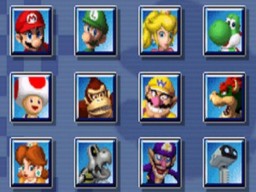 MKDS has 12 characters (above).

my favourite is dry bones btw

Even with a small roster, the selection is great.

With main-stays like Mario, Peach, Toad, Yoshi, Luigi, Bowser and Donkey Kong, the characters are all great.

The new vehicles are also great, with standouts such as the Dry Bomber, Poltergust, Egg 1, Wildlife, Brute, Hurricane and Rob-BLS.

32 race tracks are in the game as well, with this being quite possibly the best roster of tracks in the series.

Grand Prix, VS and Battle are all here, mainstays of the series.

Time Trials are also in MKDS, which is very fun racing as fast as possible.

A new gamemode, Missions, is exclusive to this game, and its great.

Boss Battles, racing others and going through hoops are just a few of the many interesting and fun missions in this game-mode.

Online-Mode also exists, but the servers are down so I don't know how good it is.

But the local multiplayer still works, and it's pretty good, but you can only play Mushroom and Shell Cup.

Mario Kart DS is a good Mario Kart game all around, but it doesn't have much content.